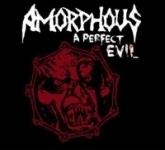 While claiming to speak for everyone would be enormously arrogant of me, I nevertheless think that a name like AMORPHOUS, though it sounds cool, will inevitably draw comparison to Finland’s better known AMORPHIS. Unfortunate, because the two bands sound nothing alike – at least not now, what with the Finnish band losing its mind and writing Prog Rock songs. But the old Finnish AMORPHIS does sound somewhat like this new Polish AMORPHOUS in parts. For instance, the guitar sound in the beginning to ‘Deception… Lie… Forgiveness’, recalls the negativity of 1993s "Privilege Of Evil" EP, unfortunately what would be AMORPHIS’s farewell record to Death Metal. From there, however, the similarity ends when polished soloing takes over, but returns towards the end of the song. For my taste this album tends to drag a bit. One of those albums that’s stronger at the onset but fades towards the end, resulting in an overall anti-climactic listening experience. And as the record wears on, the hint of old AMORPHIS dies away completely leaving somewhat dulled but not awful Death Metal behind. Maybe some of you will like it better than I do, so check them out! www.amorphous.pl, www.facebook.com/amorphouspl