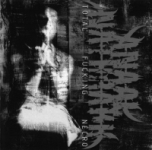 Already two things might lead you into the wrong direction – first of all, the band being British and being hailed by all British magazines (Terrorizer, Kerrang! – they actually even recorded a John Peel-session if I am not mistaken) like nothing, I was quite sure that this was another overrated band being reviewed with a blind eye by the British media like e.g. HECATE ENTHRONED, FROST or or or… Secondly, I expected another DARKTHRONE-copy since for me “necro” will be forever linked to the sound of those Norwegians (leaving their mediocre debut-album beside). Fortunately both expectations were wrong. This CD simply compiles the band’s both demos “Anaal Nathrakh” and “Total Fucking Necro” plus one song from the demo “We Will Fucking Kill You” (unreleased). However, both demos have already an unbelievably good sound and are in no way comparable to similar demo re-releases on CD. Musicwise two comparisons strike me immediately: the first being MAYHEM, when they still were “true”, meaning riffing of their glorious “De Mysteriis Dom Sathanas”-album phase (and this is not only because two well-performed MAYHEM-coversongs were featured on the two demos), and the overall approach is not much different to the one of Italian ABORYM, very technoid-sounding passages, a drumcomputer, many effects on the vocals etc. I definitely was very surprised and am eager to get my hands on the albums by those British guys, and anyone who could stand a mixture of MAYHEM and ABORYM is asked to do so as well. Instead of “Total Fucking Necro”, I’d suggest “Black Fucking Metal”. www.geocities.com/anaalnathrakh, www.rageofachilles.com.