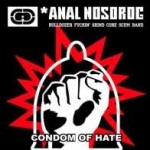 Seeing the quality of most of the last Xtreem Music releases (Kataplexia, Psychobolia or even the newest Demigod, appart of the controversy it may awake), I can’t understand why they decided to release the new album of Russian ANAL NOSOROG. I hadn’t listened to them until now, and definitely I’d better hadn’t, as their pseudo-Grind (they call it "Avantgarde Dissocial Grind Core Scum") is one of the worst I’ve listened to in a lot of time. These four Russians already released two demos and a split, and with "Condom Of Hate" (no comments about the title) I imagine they will follow them, with some kind of musical mix which gives the impression that they don’t have a clear idea of where they want to go. I will explain this you. In their songs we can find parts from Goregrind with pig vocals and catchy riffs which are so usual nowadays (and which bore me really fast, especially live), groovy Nu-Metal influences à la SLIPKNOT, going through Hardcore/Punk and some Jungle rhythms… So, a bit of everything, and this uses to be quite dangerous, and it is in this case. As always, when I write a review, I forced myself to listen to the CD several times, and it was really hard not to stop it and put it out as it became really boring, even sleepy. Without any doubt, the worst part of this recording are the vocals, which are almost really linear piggy stuff (except when they use some Hardcore backing vocals), and which make the Condemned ones sound like fucking varied stuff. Anyway, the instrumental part doesn’t get much better, as its almost limited to the groovy tones, which doesn’t differ from track to track. And if I tell you the album has nineteen own tracks, you can imagine… Apart from that they included a cover of ‘Fuck The USA’ from THE EXPLOITED, quite strange with that purely electronic bass, a guitar which you almost don’t hear and vocals in the way of the covered band (so totally different from the rest of the album). Then there are some live tracks, remixed ones and old recordings. I won’t go any further with this review, as I don’t want you to think I have something against them, simply, even if I have quite varied tastes, this is totally opposed to what I enjoy listening to. www.xtreemmusic.com