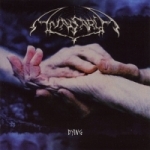 At last! Conquest! Great blaze of triumph! I greet thee, I honor thee, most welcome visitor from the depths of the night… well, enough of that citing Power Metal bands for the time has come to worship the third ANASARCA assault of fuckin’ Death Metal! Finally! After the ANASARCA split in 2001, Mike and Herb decided to carry on, thank whoever you like! To be honest, I found “Dying”‘s predecessor “Moribund” a little monotonous after a while as the pace was pretty much hyper speed most of the time. With “Dying” ANASARCA show their composing skills resulting in me being unable to sit still while typing these very words. You won’t believe how long it took me to get this far ; -) ! Dying is a pretty old school attack with lots of brutal Swedish references, just listen to a track like ‘Terminal’ for example and you know what I mean. I can find only one point of criticism, namely the short playing time. I got the bonus covers (OBITUARY, VOMITING CORPSES) for the overseas license versions, so it’s not too bad for me. And as you have the repeat button, there is a way for you to listen to new ANASARCA stuff for a longer time as well because this is what you’ll definitely want. Why make a CD longer by adding weak songs? Don’t miss this one if you liked the other ANASARCA releases and for the others: this is gonna make you addicted! Oh, here is my neck who would like to add a few words as well: “Dying” is pretty deadly! www.anasarca.de.