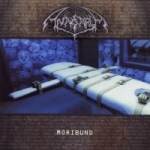 This is it! This is one of the best, if not THE best Death Metal records ever released by a German band! ANASARCA from Emden even managed to outdo their fantastic debut “Godmachine” with the release of this incredibly brutal assault! The inferno only lasts about half an hour, but it chops off many heads and spills lots of blood during that time, I can tell you! Musically “Moribund” is completely unoriginal, but that’s fine with me, cause all that ANASARCA seem to care about is technically well executed sheer brutality! This is 100% true Death Metal to the bone, with a lyrical concept about people that are awaiting their death sentence!! Their roots are quite obviously located within the American scene, cause that’s exactly how they sound like! So, if you’d combine the finest elements of the most crushing US Death Metal acts, the result would probably sound like ANASARCA!!! Killer!!! I have no idea why these guys are still so unknown overhere (compared to other traditional Death Metal acts such as OBSCENITY, FLESHCRAWL and the likes), but I really hope that “Moribund” will finally change that! Buy or fuckin’ die!!!