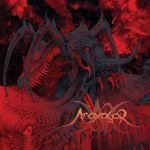 ANAXAGOR is a recent French band that plays a very guitar-oriented Death / Thrash Metal, with a lot of riff variation and some slick soloing (such as in ‘The Plague’ or ‘Louder Than All’). This is their debut album (after just one demo) and it is on the lengthy side, offering ten tracks totalling nearly three quarters of an hour of music. It all sounds very energetic and punchy, and I do appreciate many old style Death Metal moments that are to be found throughout the record, mainly in songs such as ‘Toxic Troll’ or the opener ‘The Plague’. Less to my personal liking is the fact that several moments and even whole songs such as ‘Born To Frag’ are clearly much influenced by the more modern side of Metal, namely bands such as CHIMAIRA or LAMB OF GOD. I do like some melodic Death Metal bands on the heavier side, but beyond that it crosses a line for me. And yet I find much I can enjoy here, mainly the busy guitars and the aggressive vocals, but also the inventive song structures. This is a strong debut from a new band and if you are into Death / Thrash with intrumental flair and you don’t mind the modern influences, you may find ANAXAGOR to be more than a worthwhile listen. Find that out at www.facebook.com/anaxagorbx, www.facebook.com/greatdanerecords