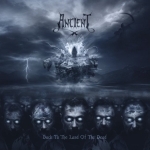 ANCIENT
Back To The Land Of The Dead
(Soulseller Records)
66:56min

ANCIENT from Norway, who reside in Greece now do not need any further introduction here. Being veterans in the classic Black Metal scene, I was more than curious to hear their new material as their first classic “Svartalvheim” still occasionally spins on my turntable. And to be honest, after the first tunes, I was not disappointed at all. It seems that a bunch of 90s bands, whose protagonists are in their 40s now have time again to get back to their hobby called Metal music and still show the younger bands, that they still can create good music with this certain feeling for melodies and atmosphere. Aphazel has shortened his name to Zel now and gets completed by the battery himself, Mr. Nicholas Barker and his old companion Dhilorz and reinvents the band again. Their roots still can be traced in their sound but their sound has changed to a fresh and modern interpretation of the classic Black Metal theme. Surely the old school lunatics will hate them for this album but ANCIENT managed to record a fresh and cool sounding album with some killer tracks, a good production and a good vibe. The opener ‘Land Of The Dead’ clearly shows, what the band is standing for nowadays and is a real cool hymn with killing blast-beats, pounding double-bass and some really outstanding guitar tunes. Especially the melodies, acoustic parts and classic Heavy Metal influenced guitar parts really make this comeback album something special. One acoustic track and a fine BATHORY cover complete this very well-done album. ANCIENT have not betrayed their roots but have grown-up as well as a band like ENSLAVED did. Love it or hate it but for me after the good DARK FUNERAL album a real small highlight in the melodic Black Metal genre this year. Check the band out via the following sources: www.facebook.com/ancientband, www.soulsellerrecords.com