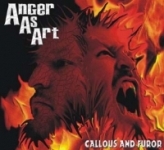 ANGER AS ART seems to be the rather new venture of several old dogs of the underground Thrash scene of the US that graced us during the gold era of Metal (80s of course) with several outstanding gems of the genre. The band is fronted by none other than Steve Gaines of Pagan War Machine, ex-Dreams of Damnation, Abattoir (US) and Bloodlust (US) fame which is certainly a good reason to check it out. Basically, what this band will offer is a very aggressive brand of Thrash Metal bordering the outskirts of Death Metal in some tiny passages. Extremely well produced and executed but lacking that raging fire that fueled this type of outfits back in the heyday of Thrash. The album definitely has its powerful moments but also bore you to death on certain songs that sound rushed or even out of place. One prime example of this are the songs ‘Bane Of My Existence’ (I’m wondering if this is the same vocalist as on the rest of the album! It sucks really bad!) and ‘Callous And Furor’; the reason is that they both display the weakest link on this band: vocals. It is not that they are extremely bad but to me they sound like a second rate Joe Comeau (ex-ANNIHILATOR, currently in TAD MOROSE) screaming their guts out and going nowhere. When the guy tries to "experiment" is when things turn into something really awful. If they work harder on the vocal department there is no doubt they will be up for something really good in the future, contact them at: www.angerasart.com. Label website: www.osmrecords.net.