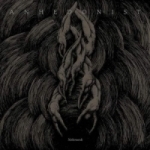 Four track album of steeply downtuned Death Doom from Washington state. Guitar distortion sounds like icebergs breaking up. Mechanical churning sections with double bass drums matching low pedaled, palm-muted guitar notes. Single-foot blasts are present but will not snap your neck off or lead to some other such chaotic scene with their conservative tempo. They seem present just for the sake of not being a total Doom act because they don’t do much to stir the pot or induce teeth-gritting or hateful outbursts of venomous wrath. Two guitars with leads for effect. Chorused guitar lines. Deep Death vocals like Mastro from ROTTREVORE. This is some generally plodding stuff with commendable attention paid to creating a thick and doomy atmosphere. The ‘transcendent’ (probably better stated as ‘reflective’) vibe they seem to crave in the doomier sections (reminiscent of a deeper, more guttural MY DYING BRIDE at turns and pure DISEMBOWELMENT worship at others) is reasonably well-developed but not total god. With that in mind, unless you actively seek after this kind of content in your Metal listening, you may find the glacial pacing of these sprawling sections a test of your endurance. This is a recommendable album only for patient Death Doom listeners who have this need for something new and very weighty. If that’s you then let this one drag you down like a giant iron ship anchor. Fans of FUNEBRARUM, EVOKEN and DISMA would be well advised to check it out. www.facebook.com/pages/Anhedonist/224249847597688, www.nuclearwinterrecords.com