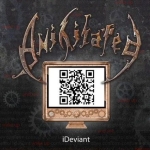 UK’s ANIHILATED that was formed way back in 1981 already (at first they existed under the PROSPEX moniker back in 1981 – 82), has said to be the English answer to the American most known SLAYER – and I don’t wonder this SLAYER comparison a bit at all if the band’s new album, titled "iDeviant", is anything to go by. To me, ANIHILATED sounds quite a bit like like a stripped down version from SLAYER, mixed with some Crossover elements that in fact, is pretty an unavoidable element within the band’s sound – knowing they started out as a Punk / Crossover band over 30 years ago. "iDeviant" stays loyal to the band’s sort of ‘SLAYER-ism’ music wise, also continuing pretty much from the same deep boot prints where they left off on their previous album, "Scorched Earth Policy", some 3 years ago. However, the only difference between ANIHILATED and SLAYER is, the latter one unfortunately hasn’t done anything as good for years, unlike ANIHILATED on their couple of latest albums at least. "iDeviant" is a well-crafted, blistering Thrash Metal album from start to finish, offering 11 cuts of politically orientated, neck-snapping Thrash Metal in a relatively furious form, in which one gets easily associated with SLAYER over and over and over again. But then again, it’s not something that would disturb people too much though; not those people anyway who have been following the band right from the very beginning of their career. ANIHILATED has always been about SLAYER, more or less – and the guys’ new album "iDeviant" doesn’t break them into something where new musical boundaries could be smashed down in terms of introducing something completely new through their music. This album is still as much some wicked and aggressive riffs of early SLAYER as some of their previous albums have been, so there’s no change to that rule here, which is just a positive thing, I suppose. Si on vocals must be a long lost brother of Tom Araya; he sounds amazingly much like Mr. Araya, but also quite surprisingly he does remind me of Mem von Stein from EXUMER by his vocal performance on the record. It’s kind hard to be completely subjective to this record due to the band’s strong musical bond to their big brothers, SLAYER. But if you forget SLAYER for a while – and take ANIHILATED the way they are gently handed over to you, I am sure you’ll enjoy the heck out of this new ANIHILATED record, there’s not just a slightest doubt about that. ANIHILATED can be found at: www.anihilated.com, label: www.killermetalrecords.de