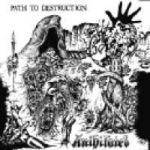 I was curious if this was a release from the British Thrash band. My memory still works after all those beers, yet when something is not that good or memorable, it tends to forget things. Let’s face it, there were many great Thrash bands in the early ’80s but there were also some atrocious and many more mediocre bands. In fact the reason why many of them never really lift from the underground was that they were really fitting in that last category. I remember listening to their debut album “Created In Hate” and not being impressed that much. Well, 21 years after the things have not changed that much. This is an EP originally released in 1986, that sounds quite limited and although one can sense the power in there, and more than a few good riffs here and there like in ‘Thunderflash’ and ‘Shadow Of Fear’, the quite prominent Hardcore / Punk touches this band has always been influenced by, more than once clashes with their more Heavy Metal side and it does not come out as exciting as some other bands did. Included here is their demo “Speedwell” which sounds more Hardcore / Punk (if I am not wrong they were previously a pure Punk band so I guess there is a reason for the sound on the demo). In fact I find the demo to be better than the EP probably because of a more suitable production, and that it just sounds more metallic Punk than an early Thrash Metal band. The vocals are an acquired taste as they are not exactly melodic, neither are they all shouted. The lyrical aspect is definitely more Punk orientated with lyrics dealing with environmental problems and social injustice, which for a die hard Metalhead of those days was not exactly out of sight but we then tolerated just one or two songs… nah, just a couple of sentences in a song talking about it before it was labeled as hardcore. So, ANIHILATED sounded in fact like let’s say a more metallic DISCHARGE or a more punked out early METALLICA. In this case the fact that they never were considered for bigger leagues is because they didn’t earn it. Period. I won’t say they were musically incompetent, just they were quite derivative and although having a potential to do better songs, they never reached it. Now, this reissue contains a couple of songs in more than one version, being it demo, the EP or live versions… which by the way, these live versions are form different shows, giving it an uneven sound to it. As a nostalgia factor and for those that collect everything, this might be of interest. For those who are more picky with their choices and do not eat that every 80s band was “cult” this is just another release more. Anyway, my recognition for the label for digging up this obscure band. The band I think is still active, and for what I have heard they are now completely in the Thrash Metal area sounding more like late SLAYER, so I would suggest to better wait for their new material or check their other two full lengths. www.myspace.com/anihilated, www.areadeath.net