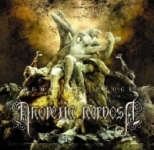 The show must go on. And dare you not change anything, since the former show was a success. But in this case I would suggest Anorexia Nervosa added something to their show. I’ll explain why this should be more pompous, which is a strange thing because normally I’d like the Metal bands (except for Rhapsody) to be less pompous. Cradle Of Filth is less symphonic on their new album, so normally I’d like Anorexia to be less as well. But, there’s something that bothers me with their “Redemption Process”. If we leave the orchestral elements aside, we’re left with more or less fast and mid-paced Black Metal that we’ve heard numerous times before in several other bands. The production is clear, by all means, and the vocals are Black Metal all the way (though, there are somewhat four ‘normal’ lines as well). Juding by my competence I can’t hear one single wrong hit by the drummer. And all this together makes “Redemption Process” clinical and without any feeling. So, adding some orchestration to the music lifts the songs. In ‘Codex-Veritas’ Anorexia Nervosa has made their best track ever. Why couldn’t you do every song like this? It’s probably one of their fastest tracks ever, but the orchestration lifts this song high above. Herein lays the problem as well. When the seven-track album ends I’m left with only one track. The others, which have their moments here and there, are nothing but fillers to me. Sad actually. Another aspect the band has to consider on their next album is the variation. I know it’s important to set the mood, but it wouldn’t hurt to change the mood in between, like doing something that surprises the listener totally and awaken him / her. If you look closer at ‘Sister September’, I think they repeat the chorus about 10 times too many. So, add much more orchestration and you can write one fast song lasting for 40 minutes if you will, because you’re definitely best when you lift the songs. www.mother-anorexia.com.