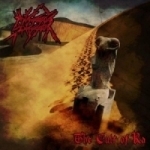 Hailing from Cesena, Italy, this 3-piece Black / Death Metal project act called ANTIQUUS INFESTUS, that was started in July 2011, released their 2nd 4-track demo at the end of April 2012, titled "The Cult Of Ra". With overly lengthy and somewhat imaginative song titles like ‘The Chapter Of Not Letting The Heart Of A Man Be Snatched Away From Him In Khert-Neter’ and ‘A Hymn Of Praise To Ra When He Rises In The Eastern Part Of Heaven’ – reminding me of what Antti Boman did with DEMILICH back in the day, this Italian horde comes out from its dark hole ripping, shredding, savage sounding – and having an intention to raise some hell of earth for sure. In a way, they sound like the early days IMPALED NAZARENE – with less speed, a bit more tamed, more varied by performance and not nearly as scary as the Finnish Nuclear Metal commandos. Having a drum machine as a part of their sound doesn’t really lower or weaken ANTIQUUS INFESTUS’ evil intentions to get their whips boodstained. There’s something appealing in their raging and mean sound that strangely invites one to return back to this disc, just to enjoy another load of well executed mixture of Black and Death Metal, the ANTIQUUS INFESTUS way. Overall the guys can be proud of their achievements on the "The Cult Of Ra" demo, which may even make a promise better things ahead of them. Definitely worth your time. For all further info check out www.facebook.com/antiquusInfestus, www.myspace.com/antiquusinfestus