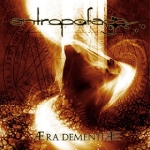 ANTROPOFAGO (Spanish for cannibal) is a Death Metal band from France, formed in 2007. Since this was my first listen to the band and their sophomore album "Æra Dementiæ", I went to their Bandcamp site to check their 2011 debut album "Beyond Phobia". Both of them released by French label Kaotoxin Records. Their style hasn’t changed much. Furious Death Metal with a never ending barrage of twisted riffs, hyper fast drumming, complex bass lines and intense growling vocals. Their debut album was weak in one aspect: song structuring. Too many riffs crammed into each song. And in most cases, the songs went nowhere, but "Æra Dementiæ" offers more cohesion. The band has improved. This time they do have some memorable parts, riffs and hooks, even in spite of the dense atmosphere they managed to create. It seems the band has had some line-up changes and this might have helped here. Production wise, the album features a well balanced mix and a thick mastering process. Ergo, there are no nuances or dynamics whatsoever. Every instrument sounds (maybe too) perfect. But not to the point of blatant overproduction. I do feel the band still suffers from the "typical" music entanglement related to this style of Metal; trying to fit every single riff they come up with in 3 minutes and thirty seconds, which is the average duration of their songs. If they keep working and developing their own style, they might have a bright future ahead. Proof of this comes in 3 songs: ‘Æra Dementiæ’, ‘Voices’ and ‘Insania Lupina’. These are, in my humble opinion, outstanding! Die hard tech Death fans will dig this album. Traditional / old school fans, look somewhere else. Contact the band here: www.facebook.com/pages/antropofago/259668169507. And you can order the album here: www.kaotoxin.com