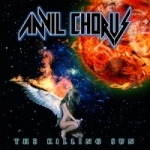 What a treat this release is! After almost three decades of these songs being only archived in demo form, ANVIL CHORUS went in and properly re-recorded a bunch of their classic tracks with modern day studio equipment while managing to preserve and maintain their unique style, sound and identity, keeping close to the original, while giving it the feel of something brand new. I won’t spend time here divulging much into the history and background of ANVIL CHORUS and the musicians involved as that would be a chronicle on its own (if you want to learn more than you would ever want to know about these guys, seek out issue # 14 of Snakepit magazine). I can’t help to refrain from saying though that while listening to this it threw me back to one of the funniest most impressible times for me in my obsession with Metal music. Hearing this CD I quickly think back to the days of tape trading (yes, before the time of internet downloading), when I’d get home from school and there would be a package in the mail full of cassette tapes usually containing demos and live tapes of bands that I’ve only read about in various magazines from around the world. One of the bands that I usually would seek out tapes of was ANVIL CHORUS. When first reading about them in Ron Quintana’s legendary fanzine Metal Mania, I could sense that there was something special about this band. While surely not one of the fastest and heaviest bands out of the Bay Area scene, which really wasn’t their forte, they are one of top quality. It was the melodic, somewhat progressive edge they had that made somewhat different than most of their thrashier comrades that were patrolling the Bay Area at that time. Most connoisseurs may be familiar with their “Blondes In Black / Once Again” 7″ single, released back in 1982, but to me it was their demo tapes which truly demonstrated what they were all about. Enough reminiscing, let’s get to the CD that we’ve been waiting for. Starting off with one of their more aggressive compositions, ‘Deadly Weapons’, we begin our journey on our way through 12 tracks of pure bliss. You can go right down the line, song after song, ‘Red Skies’, ‘Phase To Phase’, ‘Man Made Machines’, etc. each composition is a work of brilliance of its own. A great combination of progressive melody intertwined with heaviness composed with excellent musicianship and songwriting (sort of like the formula DAMN THE MACHINE would unveil in the early 90s) makes “The Killing Sun” a very diverse and ever flowing CD. The keyboard work also fits in very well, while being prominent, it is never dominant. Of course it is always a pleasure to hear the tasteful guitar playing of Thaen Rasmussen, a true standout amongst the harvest of guitar virtuoso’s from the San Francisco area. I must also mention the excellent range and vocal ability of Aaron Zimpel (who also handles the bass duties). In finishing up with the previously mentioned ‘Once Again’, it leaves one with the satisfaction that finally these songs have been recorded and properly released, however it keeps us also greedy, wanting them to go back in a record some more of those other gems that are lying dormant. Definitely a band that was way ahead of their time, these guys were and are something special. I’m still scratching my head as to why these guys never got signed back in the day, I guess most likely because they were not doing what everyone else was doing at that time, however it is because that they weren’t doing the same thing that made them stand out from all of the others. Such is life… www.myspace.com/anvilchorussf, www.rockadrome.com