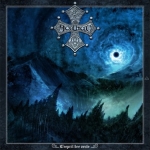 During the last years, the Black Metal scene in France literally exploded and unleashed a lot of great stuff unto the hordes of genre lovers with a certain foible for unique stuff. One of the driving forces behind that development was the the label Les Acteurs De L’Ombre Productions from the town of Champtoceaux in the historical French area Anjou. Thus I was pretty much excited to review this album, the third of AORLHAC after a seven year break and their first for Les Acteurs De L’Ombre. When I heard the album for the first time, I was quite disappointed. AORLHAC (the Occitan name of the band’s home town Aurillac) reminded me very much of an extremely melodic mix of IMMORTAL and early IN FLAMES, or comparable acts from Gothenburg of the mid 1990s. But the more I listened to “L’Esprit Des Vents”, the more I learned to like it. But not only because I still dig the old albums from Gothenburg and IMMORTAL. It’s the French lyrics and vocals that make AORLHAC stand out of the masses of melodic Black Metal bands. Somehow bands like SORTILÈGE, DEMON EYES or H-BOMB came to my mind, these grand old French Metal bands of the first half of the 1980s. And it definitely is the same fascinating uniqueness that AORLHAC shares with these bands, the special way of French bands playing a melodic style of Metal, even if it is an extreme kind of Metal. With this special ingredient, songs like the furious opener ‘Aldérica’ or ‘La Révolte Des Tuchins’, that sends some kind greetings from IRON MAIDEN are a real joy. The epic ‘Infâme Saurimonde’ and the somehow even rocking ‘Mandrin, L’Enfant Perdu’ turn out to be real highlights of the album. Another fine and really melodic tune is ‘Une Vie De Reclus (Quand Les Remparts Ne Protègent Plus)’. And the final ‘L’Ora Es Venguda’ carries highest speed and melodies to extremes. It’s up to the acoustic outro ‘L’Esprit Des Vents’ to calm down an album that took a little time and a few more runs to be a really fine one that continues the fine tradition of Les Acteurs De L’Ombre. For more information visit www.facebook.com/aorlhac or www.facebook.com/ladloproductions