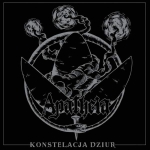 Ahhhh… Poland… land of Black Metal such as INFERNAL WAR, MGLA, BESATT and BLAZE OF PERDITION. It’s a damn fine country to suit our underground Metal cravings. And to add to that list is a band named APATHEIA, who have released their first full-length with no demos or EPs before it. "Konstelacja Dziur" is a murky, steady flow of Black Metal that, while not opening any new doors, certainly walks a familiar and satisfying path. The raspy vocals in the opening track ‘Odmetnia’ alternate between despairing monstrosities to demonic regurgitations. The track itself is a little muddled in its production. However, it doesn’t take away from the enjoyment of the song. ‘Slepe Oddanie’ is almost a depressive Black Metal ode until it erupts in atmospheric Black Metal guitars and classic blastbeats. ‘Zimna Krew’ is more of the same aural delivery, which keeps the album consistent and without straying from its path. The mix of the instruments and vocals almost feel as it they surround you as they encompass a thick, foggy aura. ‘Zludzenie Zycia’ sounds like a down-tuned pit of despair until a machinegun fire of guitars penetrate our veins. The sixth track ‘Raj’ sounds like an aggressive threat from the oddities found in the darkest, dankest basement of a deserted apothecary. ‘Skracanie’ is a heap of flesh all tangled together in a mess of a song that gathers itself together around the minute-and-a-half mark. APATHEIA definitely realize how to put together an album of solid tracks that never waver too far from their Black Metal roots. And the final track ‘Supernowa’ is no exception. Just when you think the band may slow down to a more melodic pace, they jump back in the acidic cauldron to rupture our ears with more devastation. APATHEIA won’t push the envelope any on their debut album, but they certainly create a powerful collection of songs that will make any Black Metal fan let their hair down and scream bloody murder in a head-banging frenzy. For more information, check out https://apatheia.bandcamp.com, www.godzovwar.com