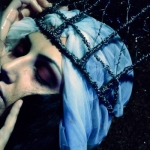 APHONIC THRENODY is an international Funeral Doom / Death Metal act with members coming from U.K., Italy and Chile that is active since 2002. With a really productive career, that includes 6 releases and different projects for each member – some still active, some already defunct (U.K.’s GALLOW GOD, Italy’s VOID OF SILENCE, Chile’s MAR DE GRISES, etc.), this band sounds really interesting to me. As usual in this genre the songs are long. With 6 tracks and over 70 minutes of music, “Of Loss And Grief”, their second full-length, starts with ‘Despondency’, a track that reminds me certainly of VOID OF SILENCE. Everything, from the general sound, keyboards to drums is alike to the Italian atmospheric Doom act. This is not a bad thing since I really enjoyed “Human Antithesis” and “The Grave Of Civilization”, their last two albums. After the first track, comes ‘Life Stabbed Me Once Again’, one of the “faster” tracks here, and ‘All I’ve Loved’, a track that introduces some clean and feminine vocals from time to time. The intro sounds strongly influenced by acts like SWALLOW THE SUN or DAYLIGHT DIES. One of the most interesting compositions here is ‘Lies’, the fourth track. ‘Lies’ start with some nice acoustic guitars, piano, violins, clean vocals and slow drumming that works as an intro. Close to the sixth minute (!) it is possible to hear some growls and the song offers a different development, transiting from slow and heavy parts of pure Doom Metal to passages where we can hear, again, acoustic guitars, clean vocals, and piano. This track is adorned with several good melodic guitar solos. Reaching almost 20 minutes of music, this is the longest track on the whole album. This work close with ‘Red Spirits In The Water’, that shows a nice work on guitars, and ‘A Thousand Years Sleep’, the sixth and last track here. To summarize, APHONIC THRENODY’s music can be described as atmospheric, depressive, slow, sometimes melodic. “Of Loss And Grief” is a good work of one of the most interesting genres nowadays. This album is for people who love acts like EA, COLOSSEUM, UNHOLY or FUNERAL’s (Norway) first work. Despite the awful cover art, this deserves your attention if you are into the aforementioned bands. Follow the band at www.facebook.com/aphonicthrenody and get “Of Loss And Grief” from www.tfhrecords.com.