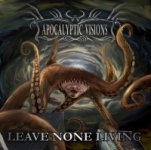 What APOCALYPTIC VISIONS have done on this, their second album, is what I would have expected DEICIDE to do. That is, retain enough Death Metal to remain associated with the genre, but simultaneously give a wider and wider berth to Black Metal à la ENTHRONED. I’m sure the comparison between this band and DEICIDE may sound strange, but consider the deep, almost watery lead vocals, and the higher syllablic voice that sounds nothing so much like a pestilential ghoul perched in a dark corner of Notre Dame’s belltower. It sounds exciting, to be sure, and if DEICIDE had indeed released this album, it would probably receive more favorable reviews simply because it beats the ever loving pus out of everything DEICIDE did between 1995-2006, especially the last albums on Roadrunner. But, alas, because DEICIDE did not write this album, and there are pieces of music on it that Glen Benton would never in a million years use, we are obligated to cast favoritism aside, and grade this album properly. That is to say, it should be viewed with some skepticism for it isn’t oustanding. www.myspace.com/apocalypticvisions