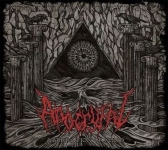 The young Finnish extreme Metal soldiers in APOCRYFAL approached me with another slice of hungry and blood-thirsty Death Metal bombardment, this time offering 5 songs, wrapped up beautifully with a luxury-looking digipak CD release. APOCRYFAL have taken a couple of extra steps forward as far as the maturity and execution of their new stuff is concerned, which is also something I personally expected from their follow-up release. As punishing, ravenous and ripping Death Metal this is as I remember it being earlier, hitting every fragile bone is your ugly corpse – and just crushing them multiple pieces if just this nearly awful load of cliches are allowed in this part of the demo analysis. Having listened the band’s new EP titled "Aberration Of Mind", for a few times in a row actually – with a concentrated mind and a pair of sharp and burning ears, it’s somewhat easy to state the obvious: homework well-done APOCRYFAL. This warship is steadily yet determinedly sailing onward in the most storming, blood-red waters – and you will be on their target list next. The last song, ‘A Theist’, hits bull’s eye accurately, yet so mercilessly – and eventually sinking this one poor ship that dared to confront the APOCRYFAL troops in the same, murky seas. APOCRYFAL are seriously one of the most promising new Finnish Death Metal outfits that are out there to kill… the ugly way. From this moment on, I definitely will keep my ears out for them even more focused than the last time, that’s for sure. More about these all-mangling and hysteric sounding Deathsters can be found at: www.facebook.com/apocryfal