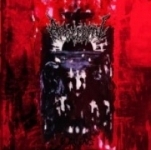 Just formed in 2009, this somewhat young Finnish 5-piece grinding Death Metal act – using the moniker APOCRYFAL, has got their 3-track debut demo out, titled "Ravens". I bet you like it raw, straightforward, just downright brutal, severe sounding and unpolished? Then the APOCRYFAL camp might be the answer for your call. The band gives a lesson in extreme sonic violence, sounding actually quite well prepared for nailing a few pairs of curious ears to their stuff. 3 songs within just under 12-minutes is what they can offer for listeners this time – and for a debut demo, this ain’t bad at all. I mean, if their primary purpose was basically to put together 3 songs of the most mangling and crushing Death Metal – and dipping it into the pool of Grindcore for a moment to attach a rawer edge to their merciless and uncompromising sound, then their task has finely well been accomplished, I think. As for a bit negative – or let’s call it kindly ‘constructive criticism’ regarding this particular demo in question, sure thing it’s undoubtedly a pretty one-dimensional approach they are able to offer on their 3-song effort. But as long as they enjoy doing what they do, then by all means they should stick tightly to their own game, just to see how far it’s meant to carry their troops onward in the coming weeks or months or whatever. Besides, appealing the masses is meant for those people whose suckitude level is higher than the highest peak of Mouth Everest. And at that, APOCRYFAL do not suck one damn bit. www.myspace.com/apocryfal