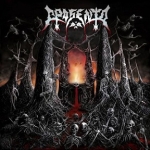 APOSENTO? Never heard of them before? The same goes for me, believe me! This band from Spain was already around during the golden age of Death Metal, having released two demos and an EP, “Welcome To Darkness” in 1997, before throwing the towel. But like so many others, APOSENTO rose from the grave again to finish their mission. Guitar player Manolo revived the band with two old members and two new members in 2012 and immediately released another EP that connected the two phases of the band. Three old demo songs in English met two new songs in Spanish. With their first, self-titled full length album, APOSENTO now present their songs completely in the Spanish language. And that album has more to offer than just Spanish lyrics. It also offers very solid and brutal Metal of Death mainly influenced by the US school of Death. Just listen to ‘Hijos Del Caos’, a song that’s definitely so much influenced by MORBID ANGEL, it could be seen as a tribute. Well, sadly their stuff is nothing more than solid or more precisely barely more than average. And it’s not that the stuff is really bad. It’s more the problem that everything sounds either well known or in some moments quite exchangeable. But some tracks are quite good food for Death lunatics, like ‘Muerte Lenta’ with its brutal slow riffing or the energetic ‘Inquisidor De Un Falso Profeta’. But in general, I will file this album as average. Lovers of the US way of Death won’t do too wrong to check www.aposento.es, www.facebook.com/pages/aposento/738317632866483, www.xtreemmusic.com