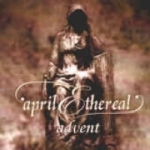 I have been fooled by the band name and the album cover art in the first place, because I thought I was dealing with a gothic / ambient outfit. Well, the reality is more complex than that. If you can find some gothic elements in "Advent", these are mixed with some Black and Death metal vibes, and the result is rather strange and somewhat difficult to describe. APRIL ETHEREAL are a Polish three piece (the recording line-up being only two guys), and I don’t know at all what they have done before. As I said, the music on offer here shows lot of influences, from folk Black Metal a la ULVER to Swedish melodic Death, the whole being played at pedestrian pace most of the time, three tracks (the better ones) being really fast. I can’t say I was convinced at once by the result, albeit subsequent hearings proved that "Advent" has its moments, even if we are far from perfection here. The production in particular is of the amateurish kind, maybe the band lacked proper means in the studio, I don’t know. To give you an rough idea on what is going on here, I could say that APRIL ETHEREAL sound like a second rate OPETH, mainly because the obvious concern to mix various atmospheres, but minus the delicacy and the progressive elements of the Swedish band. The very brutal vocals are somewhat irritating, sometimes they seem not to fit properly with the music; I suppose this problem is solved now, as the band recruited a vocalist. The lyrics are of the introspective kind, and there is no blank space between songs, so you can see "Advent" as a concept album. I can only advise you to give the band a fair chance by listening to this, because there is obviously a lot of potential on display here. Let’s say it is good for a first try, but APRIL ETHEREAL have to make a lot of progress next time to be a winner.