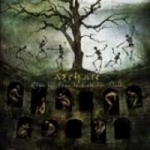 ARCHAIC
The Time Has Come To Envy The Dead
(Vic Records)
40:28min

There are albums which need a long introduction and there are albums which only need one word to summarize the essentials – SLAYER, SLAYER, and again SLAYER. The Hungarian band ARCHAIC recorded with "The Time Has…" an album on a technical unbelievable high level especially if you keep in mind that we are only talking about their second official release. The album will blow the air our of your lungs – technical perfectly timed Thrash Metal just between the traditional Bay Area sector – the band just returned from a tour with TESTAMENT – and the almighty SLAYER. And they never loose control over their high speed monster they easily contribute one great solo after another to make the wild ride worthwhile. I don’t want to add anything further – a new beast from the east has left his cave – just listen to ‘Cornu’ or ‘Eternal War’ and be prepared for the coming storm. This is the way modern Thrash Metal should sound and I’m really looking forward for a coming live battle. www.vicrecords.com, www.myspace.com/Thearchaic