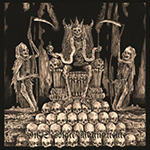 The German Death Metal scene is thriving, and has been that for a good while now, I think. One of the bands that has done a good release is ARCHAIC THORN, who released this mini album back in 2015, and is still letting us sit here, waiting in agony for new noise from their hands. The three guys mix some gnarly old school Death Metal, the cold sounds of Scandinavian Black Metal, some thrashy riffing and disharmonic melodic riffing, and it works quite well. It takes a little while to get the album under the skin, which might by why this review is almost two years late, but when eerieness latches on, the intro and four following tracks stay for good. Just the opening riff on the first real track ‘Quenas’ makes it all worth the while, that ear catching riff, the tad off beat drumming and the rumbling bass that starts the carnage, before it all takes off, great beginning on a great track. There are a lot of great guitar riffs and guitar melodies on "In Desolate Magnificence", together with wicked growls, good basslines and ever changing paces and rhythm patterns. I can’t really understand that ARCHAIC THORN hasn’t been more around the last couple of years, as they hit the progressive occult Death Metal wave, when a couple of Swedish bands took it to a new level. A level ARCHAIC THORN isn’t that far behind, though I guess there still is time to hit it big and brutal for these guys. I am at least looking forward to hearing some new material from them. Enter the dreams of the dead here: www.archaicthorn.de, www.unholyprophecies.com