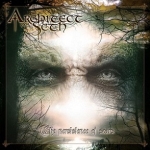 Here’s a disc that offers lotsa things to be caught up with. Paul Rousseaux who’s responsibility area consists of vocals, guitars and programming – and Yohann Kochel who also plays some guitars in this French duo named ARCHITECT OF SETH, are not summoning the dead here but instead are here to create technically breathtaking, tricky, experimental and complex Death Metal – or that’s what they at least have done on their debut album "The Persistence Of Scars". The beginning of the opening track ‘LFDY’ makes you think this duo would perform some sort of Doom Metal but right after reaching the 1:30 minutes mark, ARCHITECT OF SETH takes a whole different musical mode – and starts showing its true colors to the listeners. It can be noticed right away that the guitars’ sound is nicely crispy and Paul’s got a very fitting voice for the style they do on this record: in fact, he has this tendency to sound partly like Martin van Drunen (ASPHYX, HAIL OF BULLETS) and Patrick Mameli (PESTILENCE), so if you just happen to like those 2 aforementioned voices a bit at all, there’s no way that you wouldn’t like Paul’s voice too. As for the songs, like I said right off the bat in the very beginning when starting writing my thoughts about this album, there’s really lotsa things going on within "The Persistence Of Scars". The song structures have been built up the kind of way that tempos are changed nearly constantly, making the songs a bit hard to follow actually – and which probably may be a bit too disturbing for some people really to enjoy this record. Then again, if you understand and enjoy such bands as CYNIC, NECROPHAGIST or OBSCURA, then you might find ARCHITECT OF SETH worth your time as well. There’s undoubtedly a good load of talent and skills involved in this duo’s ideas – and the way to carry out these ideas through their music. In the same breath it can be admitted that it’s quite a colorful yet extremely tricky puzzle that this French duo has squeezed into the record song wise but can still be enjoyed as small portions at least. More about ARCHITECT OF SETH can be found at: www.facebook.com/pages/architect-of-seth/163671453650967, label: www.greatdanerecs.com