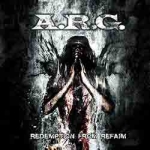 Sometimes there are reunions that no one really expected. A.R.G. from Kuusamo in Finland didn’t really blow up dust in their first period of existence in the late 1980s and early 1990s. Asides from a bunch of demo tapes, they released three EPs and two albums on the local Megamania label. The better known second album “One World Without The End” was licensed for Europe by Black Mark and thus it can be seen pretty often in second hand shops. Their pretty Bay Area based Thrash wasn’t that bad, yet it was far too unspectacular to gain bigger attention. And the same goes for their comeback album “Redemption From Refaim” that just saw the light of day. I might end my review here, yet I think some more words on the album would only be fair. Yes, this album is mostly not that exciting. Yes, the world of Thrash Metal could have easily lived without “Redemption From Refaim”, Yes, a comeback of A.R.G. is not what the world waited for. But like their first two albums, this one is not bad. Some nice and pretty aggressive riffs, a decent, yet a little too modern production and vocals close to Death Metal are on the credit side. And with the grooving riff monster ‘Bloodstar’, we find a real cool track on “Redemption From Refaim” that somehow reminds me of THE CROWN on their brilliant “Deathrace King”. But one lonely swallow won’t make a summer. And that’s why I think that this reunion is a superfluous one. If you’re into Thrash, you might check A.R.G. at: www.reindeermetal.org, www.facebook.com/ancientrottengraveguards, www.rankakustannus.fi