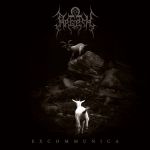 ARGESH from Varese in Italy are active since 2010 already but hardly any info is available, just that after a decade as an active band they finally unleash their first full-length “Excommunica” via Nero Corvino. The intro ‘Abiura’ starts with tribal drums, some slight strings and choral-arted chants, spoken passages and some infernal keyboards in the back before ‘Suffocate In Oxygen’ starts with fast and uncompromising but also melodic Black Metal. Somewhere between BEHEMOTH, DIMMU BORGIR and DEATHSPELL OMEGA, the Italian horde cooks their own special meal and presents themselves pretty matured in songwriting and instrumentation. A very melodic lead and DARK FUNERAL – esque fast drumming shows how skilled the involved musicians are. But instead of just using caws they vary the vocals with melodic parts like SHAMMASCH present their style. But not only that. Somehow the crazy melodic guitars bring back some slight memories of early SADIST, who did some crazy shit back in the days. Definitely very melodic and matured, even though the drums partly sound like they used a drum-machine. ‘Source Of Miracles’ starts with a Death Metal touch and definitely is pretty technical and crazy and far more in the Death Metal direction of BEHEMOTH. ‘Praelatorum Pedophilia’ follows the same direction, but has a very memorable melody line and goes in a very melodic direction, but enriched with fast double-bass and good breaks. A very outstanding track. ‘Apocalypse 20.7-8-9’ starts with some freezing keyboards and sampled spoken passages before going again in a melodic Black Metal direction with some very good guitar tunes and fantastic drum work. The last track of this short album is ‘The Elohim’s Mark’, at first listen a pretty normal, but good melodic Death Metal track which gets faster in the middle and again has some fine guitar melodies and maybe this one is the best track of the album as the songwriting, vocal work and a good sense for melodies really nail it. All together a short and diverting trip into the melodic Black Metal world and definitely worth to check. Hopefully it will not take years again to hear some more tunes from them. For more info, please check one of the following sources: www.facebook.com/argesh-apostate-black-metal-138158082878058, www.facebook.com/nero-corvino-393956571352888