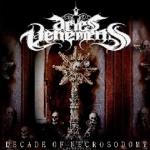 This furious goat from a little town called Nowy Targ by the river Dunajec in southern Poland, has already word for word seen a “Decade Of Necrosodomy” and recording before getting released into the wild in 2014. ARIES VEHEMENS was founded in 2002 by ROTTEN AGE vocalist “Zombie” who later was joined by more of their members. And after already twelve years of existents this line-up finally realized “Decade Of Necrosodomy”. Why it took them so long, I couldn’t figure. But of cause the musical and technical progress as well as member changes can always slow down the process of producing an album. Therefore, with not knowing through which fog they had to stumble until this record saw the lights, I maintain the odyssey was worth it. “Decade Of Necrosodomy” is a very balanced, grounded and self-explanatory kind of an album. With no false ambitions and no failed attempts. Malicious Death Metal, the Polish way. Simple, forward, merciless and very well structured. I really enjoy the directness of this LP cause it has everything it needs to be conspicuous but still doesn’t raise a claim to be extremely distinctive. In a way that you feel they have gone through a process and know what they want to play and specially what not to. ARIES VEHEMENS presenting a storm of haunting riffs and driving drums. Most of the time focusing on accentuating the riffs with both, guitars and bass. Therefore its not very extravagant but ass kicking and forceful. And even if they repeat a four chords riff over and over its still dynamic and convincingly neck breaking. Recorded is the whole demon by their guitarist “Blackness” and mixed by “Godek” a local Metal maniac in the his home studio called “Ungod Studios”. Both achieved just a perfect job here. Very warm and organic sound with a lot of range for the bass and all the profundities their music works with.“Decade Of Necrosodomy” is a straight and powerful Death Metal blast with just the right amount of darkness and evil. For further info check out: www.facebook.com/pages/aries-vehemens/164239906942263, www.goressimorecords.com