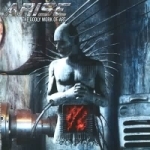 Sweden – at least I suggest that these four guys derive from Sweden although I actually don’t know where Sävelund is and more information is not to be taken from the infosheet – and what to be expected from Sweden? Of course Swedish Death Metal. Even if I didn’t know anything about this band I’d thought they come from Sweden. The question that remains is nonetheless if we really need another band that is somewhere between AT THE GATES and HYPOCRISY tuned into a modern way – I think some parts could also easily fit to those Neo-Thrash-bands like MACHINE HEAD. Didn’t we have the possibillity to buy enough albums of bands that sounded the same? If you can answer both the questions with a definite "no" – I’d suggest to buy that album. There’s nothing wrong with that album: well-produced, well-played, well-composed but you always think that you have heard this somewhere else already – especially the beginning of ‘Delusion Of Life’ has a lot of HYPOCRISY -reminiscences and the vocals are very much like those that Tägtgren used although less powerful. Perhaps I have simply heard too much of this stuff. Actually the packaging is the outstanding point on this album – which should say enough. www.ariseonline.com.