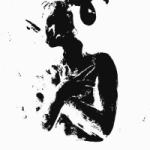 Here’s something interesting and definitely different for a chance. ARKHAMIN KIRJASTO is some sort of a 2-man project type of musical incarnation, put together by Jussi Lehtisalo (the guy keeps himself constantly very busy with his other ‘cannot-list-them-all’ bands, plus by being a chef behind Ektro Records) and former live member of Finnish Death ‘n Roll legends XYSMA, Samae Koskinen. These 2 lads together have succeeded in creating quite a diverse sounding record, which combines old school Death Metal à la AUTOPSY, NIHILIST and FURBOWL with some ‘MAIDENesque’ melodies, grooviness of the likes of ANGEL WITCH and early BLACK SABBATH – added even with small portions of psychedelia and progressiveness (à la VOIVOD), for good measure. So yeah, you could say we talk about a kinda mixed musical package here, which however, seems to work pretty darn amazingly well in favor of them. ARKHAMIN KIRJASTO is definitely a breath of fresh air, pretty much reminding of those times when XYSMA recorded their 2nd album titled "First & Magical" – and when the Swedish FURBOWL entered the studio to record "The Autumn Years" in autumn 1993. A mixed soup like this, does surprise its listeners every time when it’s meant to come right behind the nearest corner towards you – and that’s always something that overall is so great about music when that surprise factor is involved with it – generally speaking, I mean. Also, I gotta say that at times Samae on vocals, reminds deceptively much of Johan Liiva from the FURBOWL times – and then at some other times, even King Fowley of DECEASED vocally – especially about the times when the band recorded their much praised debut album, "Luck Of The Corpse", back in 1991. The guys’ groovily rockin’ mish-mash of Death Metal, Heavy Rock, NWOBHM and weed-reeking psychedelia, ain’t something that can be completely ignored. No, this stuff is meant to haunt and catch you eventually, like it or not. To find out more sweet little things about this pretty unique sounding grouping, simply go to: www.facebook.com/arkhaminkirjasto, label: www.ektrorecords.com