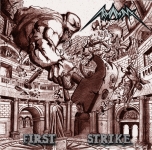 I think that it is not just me who doesn’t really know about the Metal scene in India. You heard about the existence of Metal in India, yet you haven’t heard any music. Now it is due time to change that. And the best choice to do so is ARMAMENT, a young and fresh four piece from the megacity of Kolkata. The fittingly titled EP “First Strike” is the debut of the band that started in 2011. And I was blown away when I started to listen to that “First Strike”. The opening riff of ‘Hammer Of God’ made me think that good old HOLY TERROR are reborn. But soon there was another band coming to my mind as well, also thanks to the vocal delivery of singer War who made me think of the young Mille Petrozza. And it’s not just the voice that reminds me of KREATOR here. But, hey! Highly energetic Speed / Thrash in the middle between the two aforementioned bands and is not the worst idea here. And if it is packed in such a great song like ‘Hammer Of God’, it’s more than fine with me. Of course ‘Chaos Prevails’ features some more Teutonic Thrash elements, and again this song is pure energy. The following ‘Wings Of Death’ slows down just a little bit and sounds like a forgotten mid 1980s Thrash gem, with a wicked kick in the ass and great guitar solos. ‘Gas Chamber’ turns out to be the fastest song on “First Strike”, with an ultra high speed part that brought the nearly forgotten Japanese Thrashers CASBAH to my memory again. Sadly there are just five songs on this EP, so it is already time to say “Good bye!” for a second or two. And how much more classy can a final song be than here. ARMAMENT paid their tribute to AGENT STEEL with a furiously thrashing version of ‘Unstoppable Force’ that is pure joy. In the meantime I’ve listened a lot to this EP and leave you with one important message: this is the best fuckin’ old fashioned Speed / Thrash bastard I’ve listened to in ages! ARMAMENT have stepped into the scene with a big blast and “First Strike” should be a feast for all lovers of great Metal! Check the band out at: www.facebook.com/armament666 or armament.bandcamp.com/releases. And visit the very dedicated company responsible for the distribution of this masterpiece: www.transcendingobscurity.com