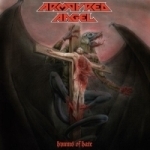 I love when a label gets into the business of releasing the, more or less, whole discography of an old an almost forgotten band. Especially as this, where the material is compiled from demos and 7" EPs, which can be quite tough to get hold of, years after the initial release. ARMOURED ANGEL hails from Australia and started out as speedy Thrash Metal in the start 80s and later turned darker and into the world of Death Metal, though they kept a nice tie to the thrashiness. "Hymns Of Hate", which also is a track that can be found on the "Stigmartyr" EP from 1992, is dealing with the bands transformation from Thrash to Death Metal and beyond. All we miss on this release is the first demo, which would have been fun to have as well, to hear the full transformation from the early recordings until 1995, where the last demo leaves us. After that ARMOURED ANGEL released a full length entitled "Angel Of The Sixth Order" in 1999, which by the way, is recommendable. Though back to "Hymns Of Hate" which takes on a brutal trip from some Death Metal inspired Thrash Metal on the band’s second demo "Wings Of Death" and on. The progression of ARMOURED ANGEL’s music seems very natural, from the Thrash inspired Metal to pure Death and darkness on the latter releases, a nice steep curve of forced brutality and relentlessness, without loosing the Thrash Metal nerve and intensity in the music. The real change in style and stylistics is the last demo on the release "Demo 1995" that so far has been unreleased, where the band starts to incorporate atmospheric parts and find themselves in a darker and more doomy overall atmosphere, which isn’t bad at all. And it is the style that progresses on to paint "Angel Of The Sixth Order". An album Abysmal Sounds re-released last year. "Hymns Of Hate" is a nice compilation of this band’s work and a great tour de force of ARMOURED ANGEL’s progression through the years. Too bad the band now has disbanded, as it could be great to follow them for 30 more years. In my personal opinion I had gladly seen the band had progressed the style they delivered onto "Mysterion" from 1994 and didn’t progress into "Demo 1995" and beyond, not that the music is bad after said demo, I just dig the thrashier more intense Death Metal from these guys, more than the darker and atmospheric Death Metal ARMOURED ANGEL ended up with delivering. That said "Hymns Of Hate" is a legacy to check out, as the band in the right place at the right time, would have ended up much more known and recognized. More info at: www.abysmalsounds.com, www.ravenclothing.com.au