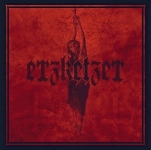 This German band has been dwelling into darkness since 2008 and has so far released 4 albums, a demo, a split an this, their lastest recording, a 3 song EP. The style of the band can be defined as an occult form of Death / Black Metal that is able to conjure very dark images and auras with their music. At times I can sense some touches of old INCANTATION where also some SAMAEL emerges, and touches of POSSESSED also arise. Even at times, I can hear a sound that is trance-inducing, where the band uses few riffs to create that, in a way early VON did, but obvious with a more complex arrangement although still raw and direct. I think the term of satanic Death Metal fits this band more, which by the powers of the dark one also at times reminds me of old Swedish Black / Death Metal bands. Also, the band is quite fine in playing in any tempo as they have the knowledge to manage the music in any form to still sound doomed and like the imminent darkness is falling in a pounding death where the victims are awaiting the worst in some of the darkest anxiety imaginable. The vocals are also very good, more on the Death Metal side, yet dark and evil enough to inject the fear of Satan into the souls of the unexpected. These 3 songs alone made me listen to their previous material and I just found a very interesting band that sometimes borders on suicidal images while playing a simple yet effective form of occult and extreme Metal, that comes out in the end with a very personal sound. Great band, great release! www.facebook.com/arroganzgermany, www.fda-records.com