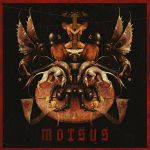 The East German three piece ARROGANZ is already around for quite a while and they can not be described as an idle band, as this new album “Morsus” is their fifth full length already. Thus they earned a good reputation especially in the German extreme Metal underground. And with great justice for sure, as their albums are damn fine pieces of dark and occult Death Metal. With “Morsus” they surely will entrench this good reputation. Starting with the sinister intro piece ‘Anodynon’, this album spreads darkness and an occult atmosphere with even ritualistic vibes in some moments. The doomy vibe of the quite melodic title track leads the listener into an abyss, sometimes darker than death (‘Sleepless Forever’), sometimes heavy as hell (‘Dead Man Galaxy’). But ARROGANZ also know how to dwell deep in the sick minds of mankind like in the ritualistic mindfuck ‘In$ide $uicide’ or ‘Praise Death = Feast Life’ with its abrupt changes of speed and atmosphere. What’s left of the listener’s brain gets smashed by puristic sounding stuff like ‘Aurora Arroganz’ or ‘553’. Or the insidious ‘Sickpeopledie.’, that even is close to Punk in its raw attitude. In the end, ‘I Dealth With The Devil’ consolidates the spirit and the varying moods of “Morsus” in one giant journey through the abysses and finishes the album with grandeur. And grandeur is a great word to characterize what ARROGANZ unleashed with “Morsus”. Visit them at www.facebook.com/arroganzgermany or www.facebook.com/supremechaos.de to get your copy