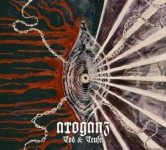 Before the year turns to its end, F.D.A. Records sends another group into the ring, to fight for a place in this years top twenty of underground Death Metal releases. ARROGANZ is active since 2008 and ready to unleash their third album over us in November. You can expect a dirty bastard of blackend Death Metal from these three guys from Cottbus. It is difficult to describe their style properly, as there are heavy influences of Swedish Death Metal acts like DISMEMBER and GRAVE, with varying speeds, interesting riffing and a lot of devotion for underground Death Metal. The sound differs between raw and dirty Death Metal but often enough changes to a more melodic side, which fits very well into their sound and shows their fine sense for melodies. Songs like ‘One Death’ or ‘Arisen From Failure Perished As King’ are carefully touched by melodic Death / Black Metal. I can hear a bit of DISSECTION, but they manage to combine these influences carefully and therefore never sound like a pure copy. Sometimes they increase the speed like in the title track ‘Tod & Teufel’ but always manage to close the circle with fine morbid melodies. The level of brutality and speed is always in the middle and makes this album an ejoyable short, morbid trip to hell and back. The changes of speed, vocals and styles, mixing old school and modern Death Metal with some Doom influences, prevents the album from getting boring at any time. A nice soundtrack for autumn time, worth checking out. More info at: www.hellishhordes.com, www.facebook.com/arroganzgermany, www.fda-records.com