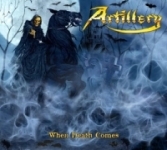 There is an old saying that on old "horses" you really learn to ride and the new ARTILLERY album "When Death Comes" is the perfect example for this statement. I think everybody who calls himself a Thrash Metal fan will at least own one of the demos or official releases of this Danish cult act which are an essential part of the European scene since their founding in 1982. The new release is in some way their second "return from the grave" album even if their last attempt in 1999 – with their "B.A.C.K." album – was not really an enormous success. The retro movement has cooled down slightly and it’s so refreshing to listen to a band which is just playing their kind of "beer" without trying at all costs to sound like somebody else. The album is offering several killer tracks and the songs are full of energy – even if some of the band members have reached a holy age if it comes to the terms of Metal musicians – and one riff is following each other without nearly any moment of rest. But please don’t connect ARTILLERY with the last Black / Thrash developments – the band is following the classic Thrash Metal way of life – meaning that the band has for sure far more in common with "pure" Metal cult acts like MEGADETH than for example the Norwegian Thrashers AURA NOIR (especially the "Rust In Peace" album could be mentioned as a rough guideline). It’s a pity that not all of the songs can offer the same high potential – some of the presented songs ( ‘Sandbox Philosopsy’ and / or "Not A Nightmare’) are lacking in the special moment – otherwise we would talk about a hot candidate for the album of the year. Nevertheless an extremely impressive release – the title track alone is worth buying this album already – which shows again that you should never underestimate the old horses. www.metalmind.com.pl, www.artillery.dk.