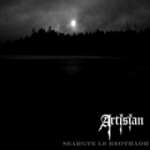 ARTISIAN is a pretty young Southampton, UK based Death / Black Metal band led by the guiding hand of Infernus Rex (Netherlands based label) which has within their ranks acts like NOSVROLOK, HORNED ALMIGHTY, GOATHOLOCAUST among some others. By listening to their early stuff (including their demo and 2 albums) I did not have any high expectations given my dislike for what I heard. Luckily, their newest release may diminish the negative impact the other recordings had on my first impression of the band but I just don’t see it of any help to attract the attention of any listener looking for some really exciting Death / Black Metal. It is admirable the progression they have shown up to the present day but I’m afraid to say their compositions still lack that violent edge Death / Black Metal should be distinguished for. They are smart enough to keep their compositions short to not bore the listeners but that does not save this album to end up taking space on someone’s CD shelf after just one listen. Their weakest point is without any doubt the vocals, specifically the Black Metal type which towards the end of this album becomes unbearable to say the least. Additionally, on the last few songs the drums are completely different to the rest of the album (drum machine?) which makes me suspect they are part of a different recording session. Contact them at: www.myspace.com/artisianmetal.