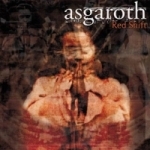 This album has one problem many of the so called orginial or innovative Black / Death / Dark Metal acts have, they mix too much instruments, samples and vocal styles into one sonic inferno, which is definitely demanding and unusual, but often not very entertaining and live absolutely unimaginable. In ASGAROTH’s case the mass of instruments playing at the same time (guitars, drums, samples, keyboards and of course the vocals) are simply too much and stay contrary to each other instead of creating one soundscape together. Without the massive electronics ASGAROTH’s third full-length CD “Red Shift” would be much better, because the songs themselves are not bad at all and have at least some comprehensible structures, intense gloomy and spacy moods, that surface when the keyboards are a bit reduced and the melodious but heavy riffing moves in the foreground. “Red Shift” is one of those albums, that will not get boring just because there are so much musical elements in each song, that every time you listen to them you think they are new, not very memorable stuff! If you like complex stuff, that is partly Industrial, partly Dark Metal, partly Black Metal, partly Gothic, partly Space Metal etc you might love this, I just don’t get it, I’m too stupid for this type of music, but maybe somewhere there is someone who likes this stuff, I don’t know? Check out www.peaceville.com for more information about this band.