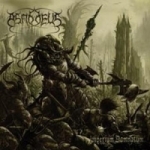 After beholding the promo-pic of ASMODEUS there is no misunderstanding possible – three human (?) beings, corpse painted and armed. Black Metal from the very depths of Austria. Never recognized ASMODEUS before, I did not know what to expect. Another mediocre Black Metal outfit, totally dispensable? But no, they really impressed me! I can hardly remember a band surprising me that much by performing such furious, well-played Black Metal. In fact, they can be even compared to Austria’s finest Black / Death Metal act, namely BELPHEGOR, especially the early BELPHEGOR, more Black Metal style outputs like “Necrodaemon – Terrorsathan” or “Blutsabbath”. But back to ASMODEUS. First of all is to mention the impressive production, really tight sounding. Since they have been active for years (their first demo dates back to 1998) and have been supporting bands like SATYRICON or BEHEMOTH they know to handle their instruments and that knowledge is most evident. Notably the superior drum performance, also I do not know if they cheated in the studio, but on the other hand which band is nowadays recording their drums without using the “trigger”-technique? Concerning the song-structure, each song features the whole variety from slow to fast, providing a dark, yet aggressive atmosphere. The vocals are deep, gravelly grunted, fitting clearly better to the music than a shrieking voice would do. Sometimes they manage to smuggle a number of fine sounding, melodic riffs into their hateful inferno, making the songs more variable and avoiding any boredom. So all in all ASMODEUS manage to refresh the traditional Black Metal without using any modern elements (keyboards, female voices, etc.) and without performing just a lame copy of a classic Black Metal album. “Imperium Damnatum” clearly shows that it is anno 2006 still possible to play genuine Black Metal in a supreme way. www.asmodeus.at.