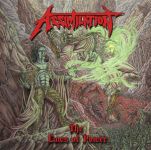 ASSIMILATION is a rather new band coming from Canada and this is their debut album. Their music style is very violent Death / Thrash Metal which in fact reminds me quite a lot of MALEVOLENT CREATION with some doses of early CANNIBAL CORPSE and also early DEICIDE come to mind. The band is a take-no-prisoner attack since the very first song as I think everyone needs to do an intro and these guys decided to go on a full aural assault. After a few listenings the band more and more reminds me of Polish Death Metal bands of a similar style and also sounding like the aforementioned influences I can sense. The production is quite heavy and for once I can appreciate they do not have a very polished sound. The band also uses some weird breaks here and there to break with a very straight-forward composition, which mostly works well. The fact is that this band works better when they go for a more thrashier approach, as when the music turns more into the brutal Death Metal territory, it sounds a bit generic. Even the vocals which are good for a deathrashy sound, the more low growling sounds a bit forced. There is a lot of potential here, and it is just a thing of polishing the sound, dropping the brutal Death Metal touches and keeping the good old Death/ Thrash attack like songs ‘Remotion Of The Succubus’ prove. A band that can be named alongside bands like MASSACRA, DEMOLITON HAMMER or even early DEATH with such a a promising debut album is sure to be a force to look upon the future. As a bonus this version has their debut EP included with a rawer sound and in a very similar style. Also worth a mention is the very good cover art, very old style. www.facebook.com/assimilationvancouver, www.saol-music.com