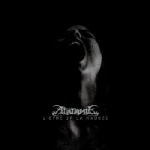 French ATARAXIE ain’t any rookie act to the Doom Metal scene any longer, or Funeral Doom and Death Metal scene to be more precise. Starting out in 2000, and having released a couple of albums ("Slow Transcending Agony" in 2005 and "Anhédonie" in 2008), this French 4-piece has slowly but surely securely been gaining a steady fanbase for themselves over these past years. "L’être Et La Nausée", ATARAXIE’s 3rd mega-lengthy recording (yep, this is a double-CD effort), has also been released on their Japanese label Weird Truth Productions, just like the band’s previous other albums. Now when there’s 100% been trust and support from the label’s side along the way, there simply must be something good about ATARAXIE. "L’être Et La Nausée" being just my first journey through the band’s dark, melodic and haunting fields of Funeral Doom and Death Metal, I myself can subscribe the band’s fascination factor as well, solely based on ATARAXIE’s a bit more broadminded attempts to make a difference with the stuff they do. Listening to this record, however, demands a lot of extra concentration from a listener; they don’t let you easily in at all through the nearest, open door but instead of that you gotta take some time with "L’être Et La Nausée" in order to get it enjoyed in small portions. By doing so, you’ll be rewarded in the end though. Promise. Just don’t let such megalomaniac lengthy songs as ‘Procession Of The Insane Ones’ (lasts over 20 minutes) or ‘Nausée’ (27 minutes or so in length) scare you away, because all the different musical layers that have brought in for their 3rd album, they all have their place in this big, complex musical puzzle. "L’être Et La Nausée" is one of those kinds of albums that are meant to reveal new shadows every time whenever paying a visit on it. There’s always something extra and exciting going on in there on this colossal sounding "L’être Et La Nausée" that you didn’t quite hear clearly upon your last visit, hence returning back to this over and over again, makes things a bit more extra-rewarding each time, so to speak. More can be found at: www.ataraxie.net, label: www.weirdtruth.jp