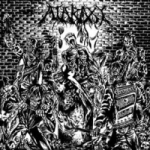 Ah, Spain… That warm and hot-blooded country has produced another dark example of Swedish Death Metal. Ataraxy are a young band (according to band’s info) that dipped their talents into the pool of northern darkness. Their demo "Rotten Shit" is a fine specimen of strictly 90s Swedish sound. They are following the lead of their countrymen GRAVEYARD and UNCONSECRATED but, unfortunately, their level of quality stands lower than formers. This is a Death Metal made with a strong feeling but with not enough power. All of this would be great if we wouldn’t have so many exquisite bands playing this type of Metal right now. But, alas, quality demos are popping from the rotten mould of Death like mushrooms form the corpses, and the bar has been raised very highly these days. The best thing on the demo are the guitars, since they have really proper sound – northern to the bone, basemental to the bone. Next we have vocals which are also good – raspy and not too deep, but altogether well done and suitable. The main problem for me were the drums which are too thin, taking away the power of the rest. On the writing side, the music is not terribly original but with lots of breakdowns to slower regions it brings enough melody and interesting riffs to satisfy this reviewer. I predict that the album will be more accomplished and if the guys put some effort in it, it could eventually proudly stand besides Spain’s finest new school old school Death Metal. Take a listen, I am sure you won’t be disappointed. www.myspace.com/atrociousataraxy