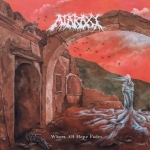 Spain and its sunny climes is not known for producing Funeral Doom Death bands who sound like they were conceived in the more colder regions of northern Europe but ATARAXY sound just like that. Their sorrowful sounding lamentations of death and darkness sounding more like it is the work of a band from Finland, UK or the Netherlands. These Spaniards deliver 5 lengthy tracks of melancholic misery steeped in complete and utter despair that are devoid of any hope and happiness and will drag the listener down into the depths of perpetual darkness. Deep growls roar over soaring sorrowful guitar melodies and crawling riffage, the percussion is versatile and the drums and bass make up a very powerful low end. There is bursts of speed and tempo changes throughout too that keep things varied and interesting. The harsh growls do relent in parts and give way to solemn spoken word passages which are brief but effective in adding to the atmosphere as does the use of clean guitars. It is a very weighty mix of Death and Doom that has its roots firmly planted in the 90s era of the genre with keyboards making an appearance here and there and the melodies do have that classic vibe to them. The combination of tortured howls and gruff growls, crushing heavy riffing and sombre melodies do bring to mind bands such as MY DYING BRIDE, early ASPHYX etc, as well as newer bands such as VANHELGD. ATARAXY effectively combine the brutality of Death Metal with the atmosphere and melancholic melody of Death / Doom (or Doom / Death) to create a dynamic album that will surely drag you into a musical malestrom of mournful murkiness where no hope is to be found… and all hope has faded into the darkest depths of total desolation and despondency. www.facebook.com/ataraxy-281047751876, www.darkdescentrecords.com