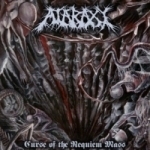 Where the hell are all these great old school bands coming from? Although one could truly speak of a trend of old school Death Metal I’m really impressed by the immense quality and high class of the majority of those young bands. Sure they don’t reinvent the genre but hey, it’s old school Death Metal and no one needs innovations here. Here’s another rather new band which is totally devoted to Death Metal like it was played in the early 90s and massively influenced by the ancient Finnish Death Metal Gods and other European masters of Death. ATARAXY released one demo in 2009, which was okay but did not leave a too big mark on the scene. But with their debut MCD "Curse Of The Requiem Mass" the Spanish fiends stepped a giant step forward and delivered great Death Metal with an unholy, dark and sinister character. There are also some faster galloping parts but mainly it’s mid paced stuff spiced with a creepy voice and some morbid guitar harmonies. Great stuff!!! This is far away from being original or something extraordinaire BUT this is passionate Death Metal with cool compositions, great songs and the right atmosphere. So don’t waste your time and check it out. www.myspace.com/atrociousataraxy