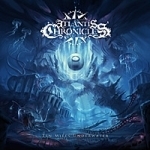 Modern, definitely 2013 progressive and technical Death Metal… eh, well, anyone here on Voices From The Darkside that primarily supports extreme old school Metal of a couple of different sub-genres? ATLANTIS CHRONICLES comes from France, and that’s exactly the definitive enough description above I would personally tag ATLANTIS CHRONICLES with, without hesitations anyway. In fact, even if I normally don’t want to enjoy my daily dose of Metal overly stuffed, sometimes when the mood is right, this type of stuff goes pretty well through my nerve system straight into my brain. So hey the guys of ATLANTIS CHRONICLES: consider yourselves true lucky winners today as I really happen to like your stuff quite a bit, even if I just said previously, I am not a big consumer of the most technical wankery in extreme Metal music. Anyways, "Ten Miles Underwater" is a concept album that blends reality and fiction to trace the descent of William Beebe into the unfathomable depths of the abyss. In other words, conceptually the album is said to be a phantasmagorical dive where simple yet existential questions intermingle in the eyes and mind of a historical figure. Sounds simple, eh? Whatever more may come to some simplier things, ATLANTIS CHRONICLES shows right off the bat that they are far from doing things in a simple way on this record. There’s always lotsa things going on within their stuff – and even after the first 2-3 spins, you seem to be totally lost with this record, which doesn’t necessarily mean it’s all bad. Not at all. Rather musically challenging, instrumentally provoking and all that when things seem to go over one edge, just make you curious about finding out more some absurdity and healthy craziness beyond the most visible surface that this stuff hides and stores within. ATLANTIS CHRONICLES surely gets gets lots of love – and then again, surely lots of hate too for testing certain limits musically. "Ten Miles Underwater" is a hard nut to get broken, but you may still want to try tasting a bite of it? Contact ATLANTIS CHRONICLES at: www.facebook.com/atlantischronicles, www.coronerrecords.net