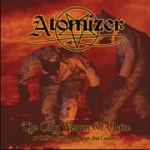 ATOMIZER
The Only Weapon Of Choice
(Agonia Records)
43:41min

Well, I think meanwhile it has become a widely known fact that people into filthy yet extreme Metal should concentrate on Australian acts: DESTROYER 666, ABOMINATOR, GOSPEL OF THE HORNS, GRENADE, URGRUND, CAULDRON BLACK RAM should be enough good examples. ATOMIZER belong in this category, too, although their War Metal elements can be reduced to the martial lyrical concept of the band. Musically traditional Heavy Metal, Thrash and even Rock and Punk are much more present in ATOMIZER’s sound and especially the vocals have an almost Punk-like rawness. "The Only Weapon Of Choice" is the Aussie’s third full-length and easily tops its disappointing predecessor "Death Mutation Disease" which suffered from rather boring songs. In 2004 the production is excellent, the songwriting offers much more variation, really speedy tracks as well as moody mid-tempo (especially towards the end of the CD), one can even discover an IRON MAIDEN-like riff now and then and despite some weaker tracks like ‘When I Die I Wanna Die Violently’ the overall good impression of "The Only Weapon Of Choice" does not get ruined. Whoever likes straight, dirty Metal from hell should check this out. For additional info check out www.atomizer.net and www.agoniarecords.com.