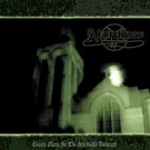 The name, ATOMIZER, belies a music that constructs an atmosphere one would not expect simply by reading the name alone. Instead, while this is a Metal album, it is an unusual one. Thrash Metal spliced with “Angel Rat” era VOIVOD and sounds that hint at early 80s Goth results in something like this record. Unlike most musical experiments, this record should not prove a hit or miss affair. Instead, it should either impress or simply satisfy. ATOMIZER have had the Black / Thrash label stuck on them ever since they began recording, and while that is true, it is also restrictive. The latest record is not only a Thrash album, it’s an esoteric album with a hearty assortment of light, but deeply penetrating melodies. Sadly, this is ATOMIZER’s final record. They’ve left a healthy legacy. www.hellsheadbangers.com, www.atomizer.net, www.myspace.com/atomizer666