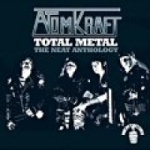 Shit, I like these Castle Records re-issues – I really do! CHATEAUX, AVENGER, WARFARE, BLITZKRIEG, HELLANBACH and so on and so forth. All these classic NWOBHM acts that used to be part of my youth (looooong time ago, hahaha) and which all sounded so fresh and unique back in the late 70s / early 80s. ATOMKRAFT is another fine example of that. Even though they came out a little later and I never really followed their career completely, I always enjoyed their debut full length “Future Warriors” a lot and even managed to catch them live twice at the time (supporting VENOM / EXODUS and AGENT STEEL / NUCLEAR ASSAULT)! This double CD compilation finally features the entire ATOMKRAFT back catalogue… and more. 29 tracks in total, which means the complete, already mentioned “Future Warriors” album from 1985 as well as the band’s two follow-up EPs “Queen Of Death” and “Conductors Of Noise” (from 1986 and ’87 respectively), which presented them in a slightly changed musical direction. Two tracks off “Queen Of Death” (namely ‘Funeral Pyre’ and ‘Demolition’) made it onto this disc in previously unreleased (original) versions, still featuring original vocalist Tony ‘Demolition Man’ Dolan, who (unfortunately) got replaced by AVENGER frontman Ian Swift after “Future Warriors” (with all respect to Swift, who certainly did a great job in his former band, Dolan’s raw voice simply fitted the band better). And there’s a bunch of additional, demo- / unreleased songs on here as well: ‘Your Mentor’, ‘Trial By Deception’, the cool GIRLSCHOOL cover ‘Demoliton Boyz’, ‘Annihilate The Bride’ and ‘Dance Of The Immortals’ as well as their early 1983 demo, which featured raw version of two of the band’s later classics ‘Total Metal’ and ‘Death Valley’. Two live tracks (‘Vision Of Belshazzar’ and ‘Foliage’ ) and the usual, cool Castle re-issue packaging (old pictures, articles and stuff) complete the picture. I personally would’ve preferred a chronological order of the songs, but hey – you can’t have everything, can you? Musically ATOMKRAFT basically started out as the missing link between the typical NWOBHM acts (SATAN, BLITZKRIEG, AVENGER etc.) and the heavier, more Punk rooted TANK, WARFARE and VENOM. Especially “Future Warriors” is an album that every worshipper of early TANK / VENOM definitely should know about. I suppose the fact that they started to lack identity by becoming more melodic (mainly due to the new vocal direction) and the quickly rising US Speed / Thrash Metal scene prevented ATOMKRAFT from the real breakthrough in the end. They probably should’ve continued on in their original line-up / style… which they luckily seem to do nowaydays! The one brandnew track that Tony supplied me with recently sounds extremely promising already and should please all fans of ATOMKRAFT’s early days for sure! So, until a new album gets released, this double CD set is the perfect item to get you into the right mood again. For all further, historical background info, check out our in-depth ATOMKRAFT interview.