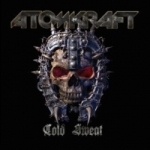 Other than the “Total Metal: Neat Anthology”, ATOMKRAFT let the first decade of the twenty-first century pass much as the last decade of the twentieth: with nothing. But now, as of late 2011, the Future Warriors are returned to us. “Cold Sweat” is the band’s first new release since 1987’s “Conductors Of Noize”. As the intro track sounds in, a creepy, spacey, sound effect and a portentous voice conjure a sense of thrilling foreboding; the Metal is about to begin. “Cold Sweat” opens with the title track (a cover of the old THIN LIZZY classic – Frank), for which a music video was filmed (which is also featured on this release – Frank). The years may have worn them down a little, but ATOMKRAFT do not show signs of fatigue. Quite the opposite – it’s almost like they’re making up for lost time. Tony ‘Demolition Man’ Dolan can still sing with the best of them. The riffs and drum beat were recorded with modern technology but the spirit of the 80s filters through very clearly. ‘Dead Again’ might not win the record for the longest song in the world, but 1:39 minutes feels like a long time when you’re suffering through a beating. I marvel at the guitar solos in this song, charged with power and speed. The tapping paints an old, but very fond and precious picture of what real Metal is all about. Things take a sinister turn on ‘The Darkening’. Among other things, a German (doesn’t sound like Hitler) speaks to a crowd or assembly – what about I don’t know, but it can’t be that pleasant. Hitler eventually speaks up for the final half of the song. Once more an enormously good solo leads the way while the dark Thrash barrels in from behind. Finally, ‘Gripped’ finishes off the single. For all ATOMKRAFT’s talent in putting the old spirit into their music, they are unfortunately skilled in conjuring the less palatable elements of the old days. ‘Gripped’ just isn’t a good song – sappy to start with, a bit of a drag to sit through – until the guitar takes over for a haunting lick then another good solo. Overall you cannot go wrong with this single because ATOMKRAFT can do no wrong. Well, at least very little wrong. For more info check out www.myspace.com/atomkraft, www.facebook.com/W.A.R.Production?sk=wall